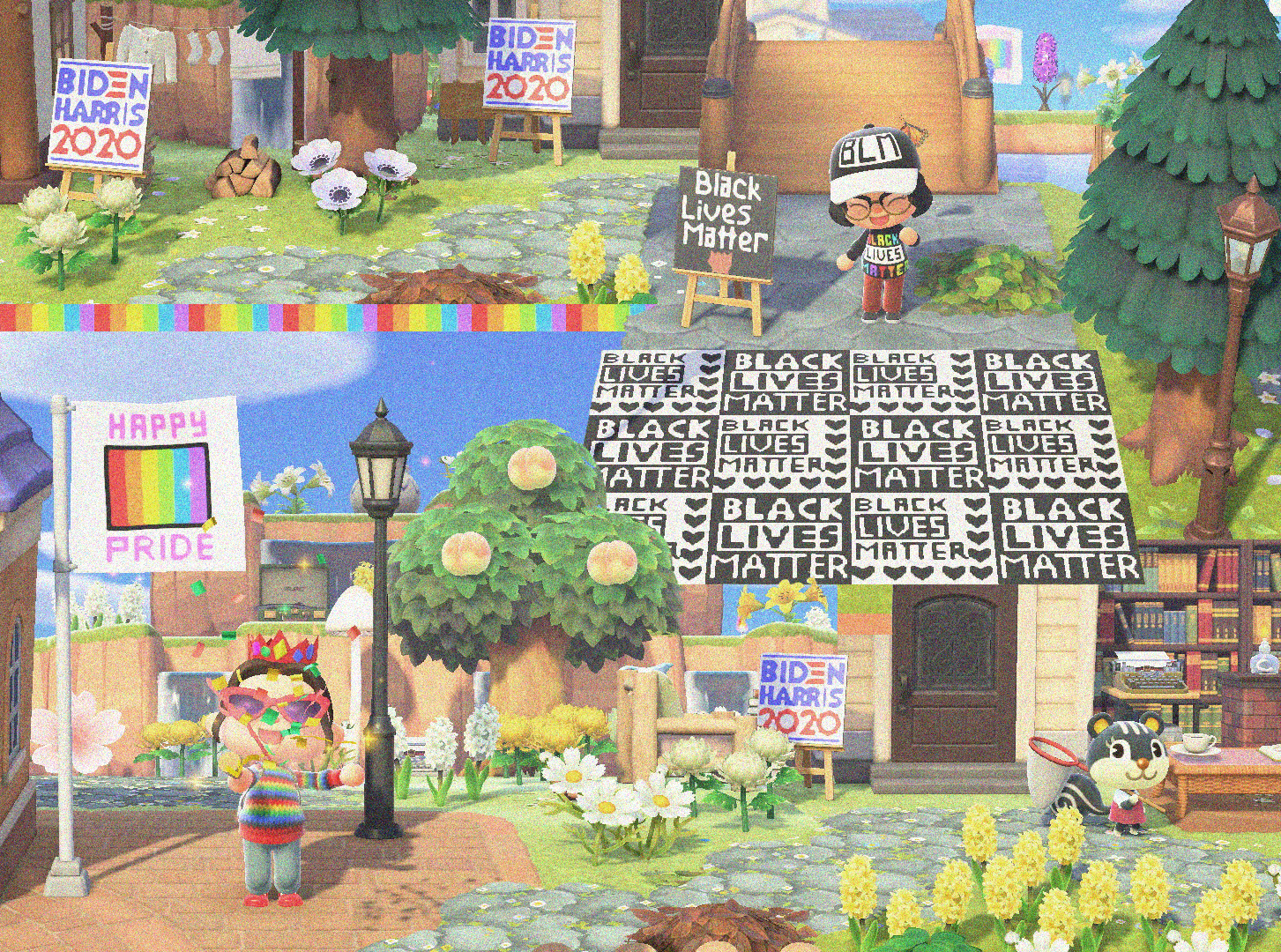 "In 2020, ACNH became a safe haven and a place to express oneself." Illustration by Ellinor Rundhovde / Animal Crossings screenshot

Five ways Animal Crossers have used the game as a platform for positive change or virtual activism.

Living in a pandemic-stricken world with a crashing economy and a clown for president sent many of us twenty-somethings looking for a virtual escape. But while some of us simply run around our Animal Crossing: New Horizons (ACNH) town fishing and smacking villagers with our net, others have utilized the game’s customization and online play features to encourage social change. In 2020, ACNH became a safe haven and a place to express oneself.

Physical Pride may have been canceled this year, but that didn’t stop the LGBTQ+ community from celebrating. An Animal Crossing Pride Festival was held during the Global Pride event on June 27th, and thousands of users and creators joined in, hosting pride-themed events and meetups on their islands.

One positive outcome of this event is that it allowed community members who cannot attend in-person pride events due to various reasons to participate.

A Call For Democracy

Hong Kong protesters used Animal Crossing this year to spread awareness of their fight against mainland China’s influence. Pro-democracy campaigners held virtual protests when the pandemic and government kept them from in-person demonstrations. Many of these protests went viral on social media leading to increased exposure in other parts of the world and sparking important discussions.

Dominatrices got creative and began using Animal Crossing as a safe virtual environment to interact with clients and keep their business alive during the pandemic. For a small price, they hit clients with nets, lock them in a virtual cage, and force them to do island chores like watering flowers. The ability for safe virtual interactions in the comfortable world of Animal Crossing has also encouraged those curious about domination to give it a try.

The Black Lives Matter (BLM) movement has been embraced by many online communities this year, and Animal Crossing is no exception. Supporters began adding BLM imagery to in-game custom designs and shared them on social media to download, allowing users to promote the cause on their island with BLM clothes, signs, and island designs.

Voting in the 2020 Election is Tom Nook Approved

Political groups and figures have used the game to encourage young people to vote in the 2020 election. NextGen America, a nonprofit focused on mobilizing young voters, is holding in-game rallies encouraging users to participate in politics. Politicians like Joe Biden have offered in-game campaign signs to put in your virtual yard, and even U.S. Representative  Alexandria Ocasio-Cortez (AOC) has been visiting her Twitter followers’ islands clad in hand-drawn campaign shirts.