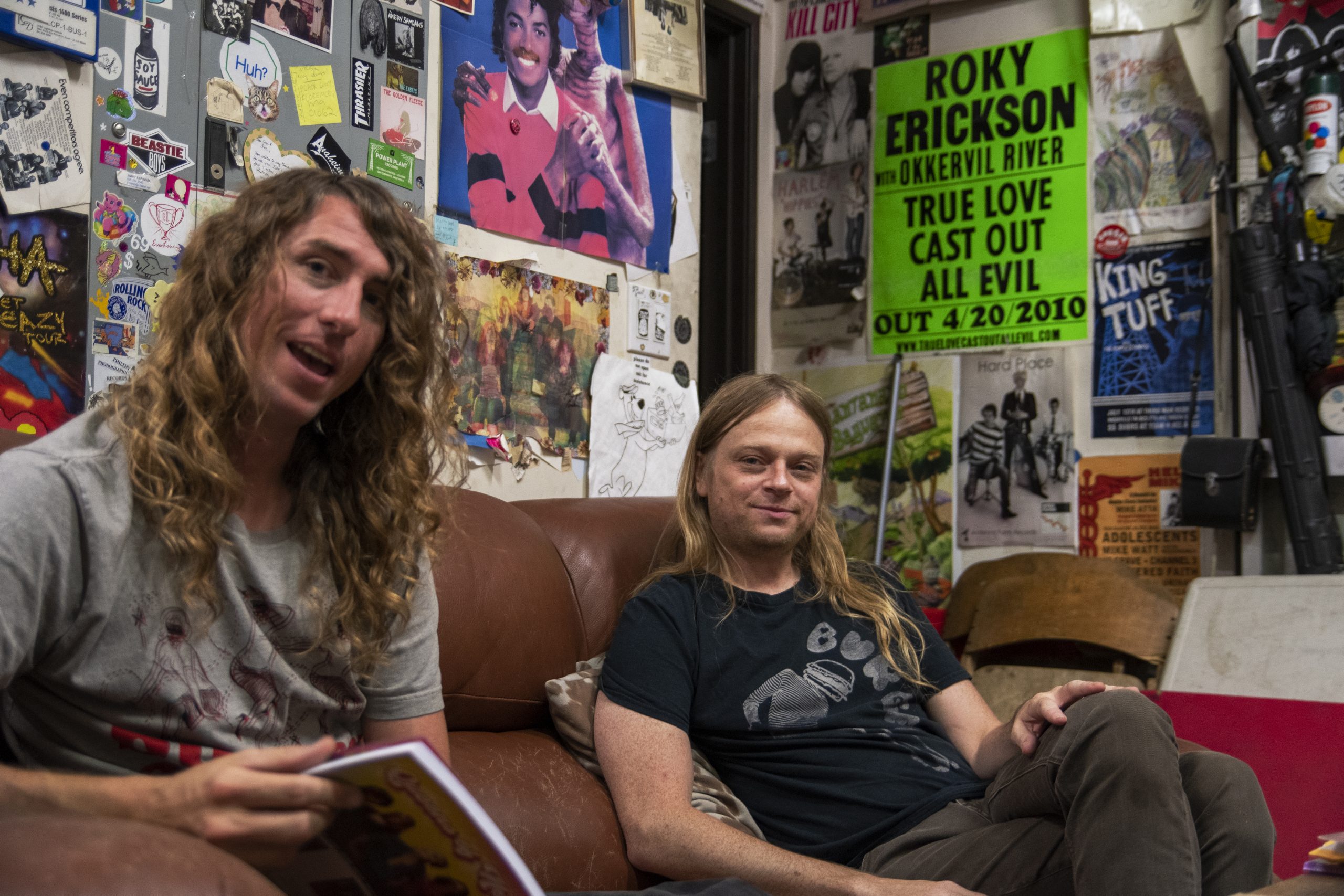 Burger Records co-founders Lee Rickard, left, and Sean Bohrman pose for a portrait on Sept. 13 in the back unit of Burger Records.

We acknowledge the harm and assault caused through and from Burger Records. We are currently writing a story centering survivors to minimize the harm associated with the currently published story that we may have caused. https://www.rainn.org/

Burgerama, hosted by Burger Records, is back for the first time in five years. So Tusk sat down with the co-founders of Burger Records to look back at the last 12 years and forward to their future as an independent label.

Co-founders Sean Bohrman and Lee Rickard go way back since their days at Katella High School. Shortly after graduating, they formed Burger Records and made a splash in the industry for reviving the cassette market.

“At the beginning it was a sort of a gray area working with other labels like Sub Pop and Universal and Warner, now they all make tapes,” Bohrman said. “When we were making tapes they were laughing at us like ‘yeah, sure make them who cares,’ and now it’s a viable business.”

Bohrman and Rickard founded Burger Records back in 2007. Two years later, the duo opened their record/video store with the help of Brian Flores, a friend and previous owner of Third Eye Records.

Burger Records and its subsidiary, Weiner Records, have produced close to 2,000 albums from a wide range of artists and re-released artists that include Green Day, FIDLAR and Ty Segall on cassette tapes.

What makes them so influential are the bands they paved the way for such as Cherry Glazerr, The Cosmonauts, Audacity, and The Garden.

The founders’ formative years and personal lives primed them to meet all these bands they helped put on the music map.

“I think the things that define Burger Records as a label come from within,” Fletcher Shears of The Garden said via email. “Sean (Bohrman)and Lee (Rickard) are good people, and the reason they’ve gotten to where they are now is by staying true to who they’ve always been.”

Before becoming the label that spotlit independent artists, Burger Records began as a way for their Band, The Makeout Party!, to release their second record.

“We self-released our second record because we couldn’t find anyone to pay for it,” Rickard said.

The Makeout Party! Made a name in Orange County and met a lot of people along the way, including one of the most important bands to them: Audacity.

“We wanted to share their music,” Rickard said. “I look back and I’m really happy we met those guys. They inspired us. Burger wouldn’t have been what it is if it wasn’t for us loving them so much.”

Audacity led to the Cosmonauts and then The Garden. The Garden has since gone on to play sold out shows worldwide, but they haven’t forgotten what Burger Records had done for them.

“Sean (Bohrman) and Lee (Rickard) and Burger Records as a whole have always been there for us,” Wyatt Shears of The Garden said via email. “They are an important part of music and they do what they do like no one else.”

12 years in the game and Bohrman and Rickard have expanded from local artists national and international bands including Detroit’s Timmy’s Organism and Shadow Show, Japan’s Chai, and Iran’s Psychic Bloom.

Burger Records focused their keen ear on the global scene and put out compilations called Burger World Compilation, which is how they found bands such as Chai and Psychic Bloom.

“I spend eight hours listening to 500 bands until tapering it down to 10 or 15,” Bohrman said. “I love discovering music and finding bands that are just starting.”

When Bohrman and Rickard are not discovering new bands, recording tapes, or working on their media outlets Burger TV and Burger Rock n Roll, they make rounds speaking on panels and festivals.

They’ve been invited to speak on panels at UCLA and throughout the world from Germany and France to Japan and Chile.

Bohrman and Rickard’s last 10 years have been nonstop, so they plan on slowing it down in the new decade.

“You don’t really get to appreciate everything that we’ve done because everything’s happening so fast,” Bohrman said.

However, the year has been pretty busy for the label thus far.

They relaunched BurgerTV with monthly episodes, and Burger Records Rock n Roll radio. Along with two festivals including Burger Boogaloo and of course Burgerama 5.

Burgerama will take place at the Echoplex on March 14 and Burger Boogaloo will be held in Oakland on July 11 and 12.

Looking down the road it has been impressive what Burger Records has accomplished in the past decade, coming from “just two weird kids from Anaheim” who knew how to get around.

“It’s neat we turned a joke into something significant,” Rickard said. “I’m proud of Burger and I think it’s cool we created something from nothing, and that we’re still doing it.”