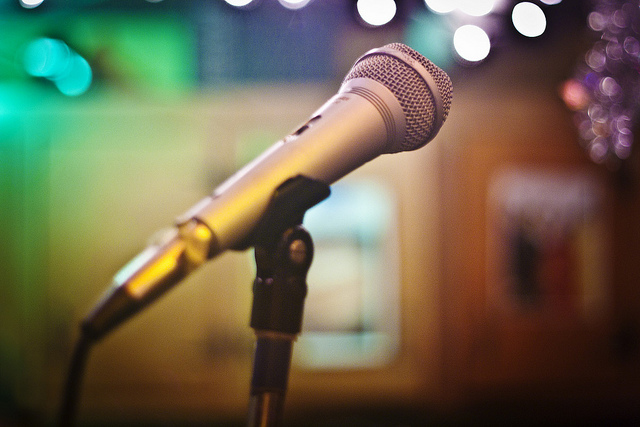 Through music, poetry, and dance, artists from all over SoCal share and cultivate their craft in collaborative performances.

The first part of the evening is a standard showcase of 10 artists. During the second half, performers are paired at random to put together a spontaneous piece in just five minutes. The result is an improvised musical experiment—an artistic concoction of multiple genres.

The aim is to “promote creation of new sounds as well as respect and unity among people,” says The CoolLab Project’s Facebook page.

What the Performers Say

“I go to so many open mics in the area, and nothing compares,” says Anna Carmela, bassist for the band Thrift.

“It really feels like a big family,” says Mary Topp, who performs hula-hoop choreography at The CoolLab Project. “People mostly do hip-hop and jazz, but I’ve seen everything, even tap dancing!”

“There’s a really strong sense of community,” says musician Hunter LaMar. “It’s an open and safe space with a lot of different demographics.”

Rules for a Safe Space

1. Everybody gets love
“No matter who it is, whatever their race is, their walk of life, they come up here, they’re getting love,” says Aläz, founder and former host of The CoolLab Project.

2. Respect the mic
“You can go to open mics all over the world, but here , it’s a family-friendly situation,” he says. “So no profanity on this mic and no sexually-explicit lyrics.”

3. Respect the performer
“If you can hear my voice say ‘shhh,’ then the crowd should go quiet. It’s that silence that’s interpreted as respect,” he says.

4. Offer support
“The first level of support is support yourself. The second part about it is these artists,” Aläz says. “Let’s see what we can do to make sure that we sow a seed so they can take their craft to the next level.”