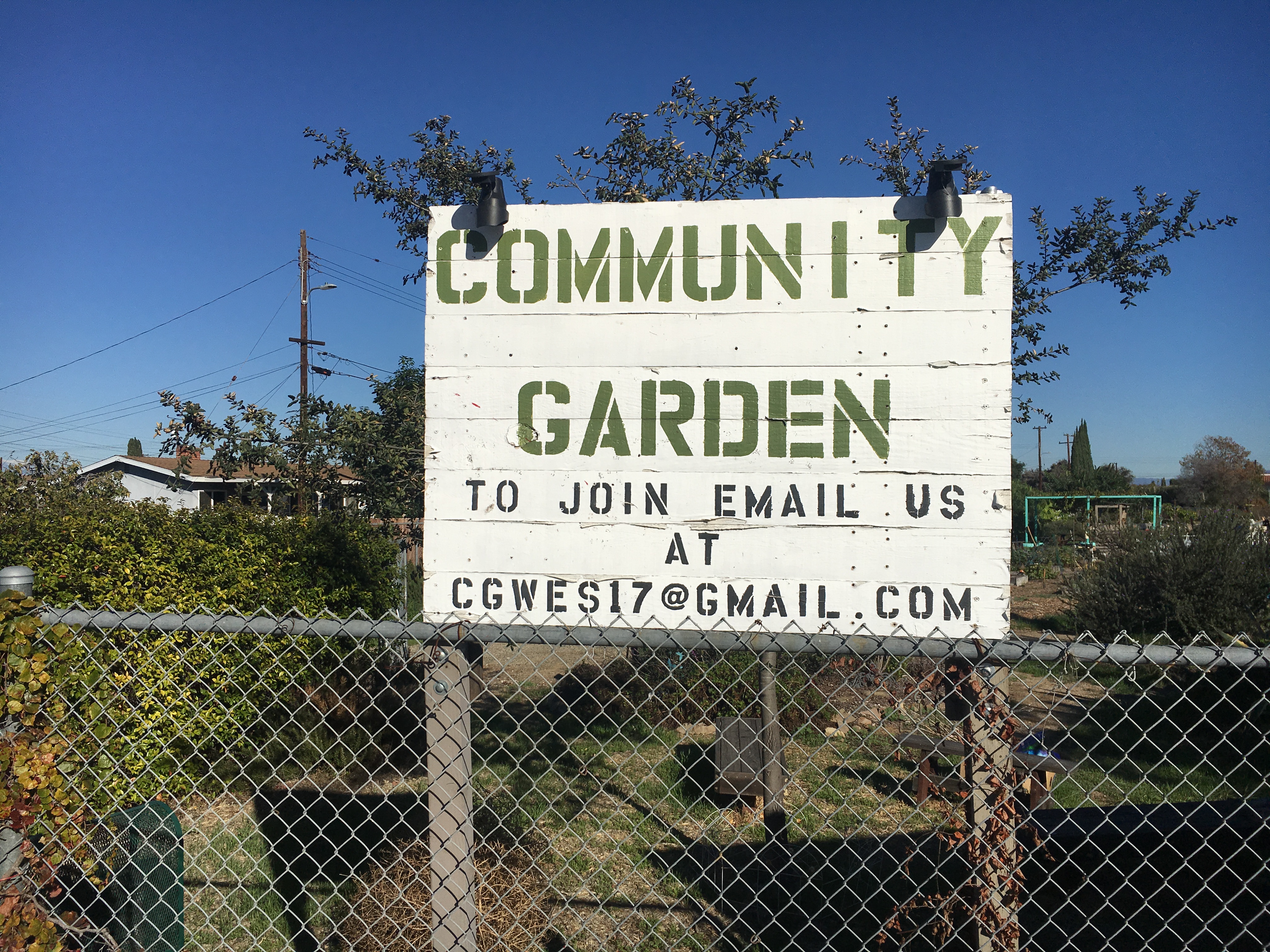 words and images by Matthew Sylvester

Sonia Inns is a part-time caretaker and current plot-holder at Common Ground, a community garden in Anaheim.

For Inns, however, being a part of Common Ground is about much more than the produce.

“I have depression, and gardening really helps me with that,” said Inns. “I just love the quiet calmness of the gardening, watching things grow.”

Common Ground is one of four community gardens in Anaheim — one of 26 in Orange County, according to the UCCE Master Gardeners of Orange County.

“Cities have used community gardens to revitalize areas that have been depressed or marginalized,” Salim said.

Salim teaches a course at CSUF called Cities and Nature, where he touches on green space and urban gardening. He argues that the community garden is the antithesis of a secluded, introverted, and automobile-dependent society.

“They’ve used community gardens to bring a sense of community back and beautify abandoned spaces and also provide food and other kinds of benefits,” he said.

According to him, another benefit of community gardens is a reduced dependency on an unpredictable, sometimes cruel commercial food system.

Common Ground’s treasurer, Kelly McVey, who holds a bachelor’s and master’s degree in geography from CSUF, has also looked at community gardens critically.

She knows the hidden values of community gardens, such as cooling down the city, mitigating climate change, and allowing a home for pollinators.

McVey claimed that Common Ground’s one beehive could supply pollination for the entire garden and some neighboring houses.

For McVey, Common Ground is not just another eco-friendly urban garden. She’s seen the physical and psychological health benefits and social benefits firsthand.

For example, the recent E. coli outbreak in romaine lettuce did not affect Sonia Inns, the volunteer gardener, because she had already grown lettuce for the season.

Inns’ mental health has improved at the garden as well. She has other gardens elsewhere, but she thinks Common Ground provides a unique community for its volunteers.

Inns pitches in by maintaining the butterfly garden and creating seasonal displays for the entrance.

According to Braith, the garden “didn’t have a lot to offer for a while.”

Braith got involved with Common Ground in 2015, three years after the garden opened. When he joined the garden’s committee, he was disappointed in the others’ lack of investment.

“Out of five members, at one point, on the committee, I was literally the only one that had a plot in the garden,” he said.

After other board members lost interest, Tim was the last man standing.

That’s when, in 2017, he brought along his friend and coworker, Kelly McVey, as the treasurer. Both of them work at a German restaurant and event center called The Phoenix Club.

They agree about the importance of being a gardener as well as a garden committee member.

“If you don’t have a plot here, it’s like your trying to rule over the garden rather than participate in it,” McVey said.

How To Get Involved

With fresh leadership and several improvements, Common Ground looks to be a hub for gardeners, neighbors and students in 2019.

Braith and McVey maintain the garden with help from their most active members. The land is split into two halves: the tamed west end and the wilder east end.

The plots on the west end are rented out on a yearly basis starting every New Year’s Day.

Each gardener is responsible for upkeep on their 4-by-8 foot plot as well as a small perimeter around it.

McVey is so committed to preparing each plot for the new renters on Jan. 1 that she has let her personal plot go barren.

Plot-holders are also welcome to take charge of any garden improvements they would like to implement.

Everything in the garden is donation and volunteer-labor based. Volunteers are typically rewarded with fresh produce.

E-mail cgwes17@gmail.com to get involved at Common Ground in Anaheim.