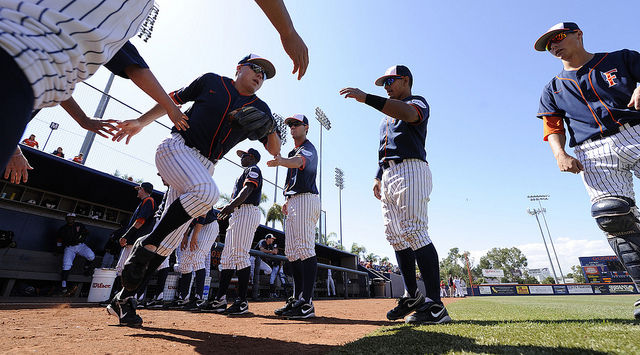 Whether you’re in the stands, at home, or at a local sports bar, watching the Titans take the field is a lot more fun than studying for that exam you have next week

Staying up to date on the CSUF sports teams is easier than you may think. Titans can attend home games on campus, stream the games online, and catch some matches on TVs at a restaurant near campus.

The best part is that you can watch the games for free. (FREE!)

So the next time you are debating whether to stay in to stream Netflix, check out FullertonTitans.com for upcoming games you can check out with your friends.

Go To A Game

The Athletics department makes it  easy for students to keep up with Titans sports. CSUF students are allowed free admission to any home game. All you need is your Titan ID Card.

Attending a game in real life makes for a great time. You have a chance to meet new people, eat some great food offered from various food trucks, and even enjoy some beer or wine.

Yes, you read that correctly. In January beer and wine became available for purchase at select athletic events.

The improvements made by Titan Athletics — including booze and cheaper concession items — has improved student attendance.

According to Jim Donovan, the CSUF Director of Athletics,  last year over 16,000 students attended games. In his first year at CSUF in 2013, only 1,200 students had attended athletic events.

Another option for watching games is to stream them online. That’s great for introverts or multi-taskers.

Streaming the games online is completely free, so if you’re looking for a way to procrastinate on that paper you haven’t even started yet, why not support the Titans.

Head to FullertonTitans.com and click the video camera icon next to the next upcoming game.

If you’re looking to party but you still want to watch the Titans, there are some Fullerton bars and restaurants that do stream the games.

According to Steve DiTolla, Senior Associate Athletics Director, area favorites such as BIGS, Kelly’s Korner Tavern, and Brian’s Original Sports Bar offer great food to go along with a great game from the Titans.

Kelly’s offers 30+ beers on tap and is located down the road in Placentia.
907 E Yorba Linda Blvd, Placentia

Brian’s is a sports bar with pool tables just across the 57.
1944 N Placentia Ave, Fullerton

Even if you aren’t the biggest sports fan, there are incentives in going to some of the games.

“All of our ticketed sports have promo to them,” said Jenn McGhen, Director of Ticket Operations.

Ticketed sports include: soccer, basketball, softball, track and field, volleyball and baseball. Promotions include items such as t-shirts, towels, seat cushions and sometimes even food.

Earlier this season we saw the Athletic Department hand out free hot wings to the first 100 students to attend the Men’s Soccer game. The wings came courtesy of BIGS Fullerton, one of the local restaurants that stream the Titans games.

According to McGhen, the giveaways are not always just for students. There are sometimes promotions that are available to the general public. However, a food giveaway is just for CSUF students, so if you bring a friend or family member who isn’t a Titan, they will have to watch you eat.

Click here to check out promotions at upcoming games.