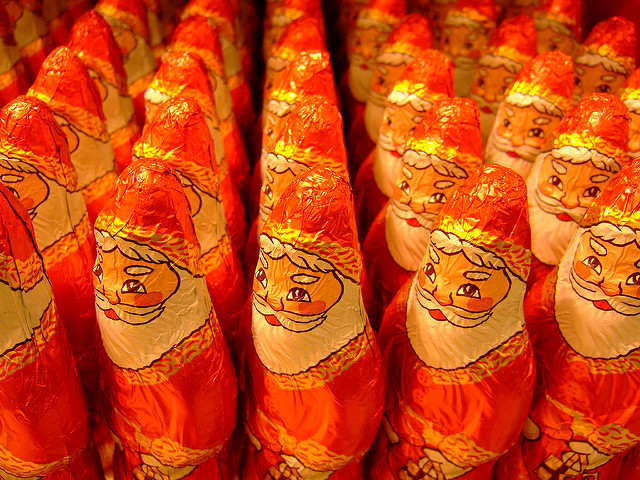 The fall semester is ending and you can tell by the avalanche of tinsel, red and green ribbons, and decorations that spring up everywhere.

It’s that spirited time of the year and some can’t wait to run off to the mall. That’s where you’ll find a line of kids waiting for a chance to negotiate gift quotas with Santa.

“The girls want to see Santa. So, we see Santa before we start anything else,” Buck said.

Luckily, the Brea Mall Santa seems authentic — a quality that is directly related to the bushiness of his beard, which “looks super real,” according to Buck.

A beard is a commitment on its own. But how long does it take to become a convincing Santa Claus?

“I’ve been Santa for 50 years, since 1969”, says Tim Connaghan, a Santa Claus for hire out of Hollywood California.

Connaghan is the real deal. He was featured in plenty of commercials, TV shows, films, and was the Santa for the Hollywood Christmas parade for 15 straight years. Additionally, he runs an actual Santa school.

“Some guys grow their beards starting in June. Some grow it all year and just slightly trim it when it’s not Santa season,” he said.

But beards aren’t Santa’s only personality characteristic. Some people picture Santa as a drunk Billy Bob with a villainous elf.

“There are those Santas that may have a few refreshments at a house party before getting into costume,” Callaghan said. “But, all of my Santa’s are background checked and have to be at their best.”

In fact, most Santas are do-gooders who might need to make an extra buck at the holidays just like the rest of us.

“Plenty of my Santas are retired,” Callaghan said. “There aren’t many places that a retired man can make that kind of money elsewhere. Most of us, we just like making kids and adults smile.”

So after being Santa for 50 years, does an person ever get tired of Christmas?

Without any hesitation, Callaghan responded: “Never.”