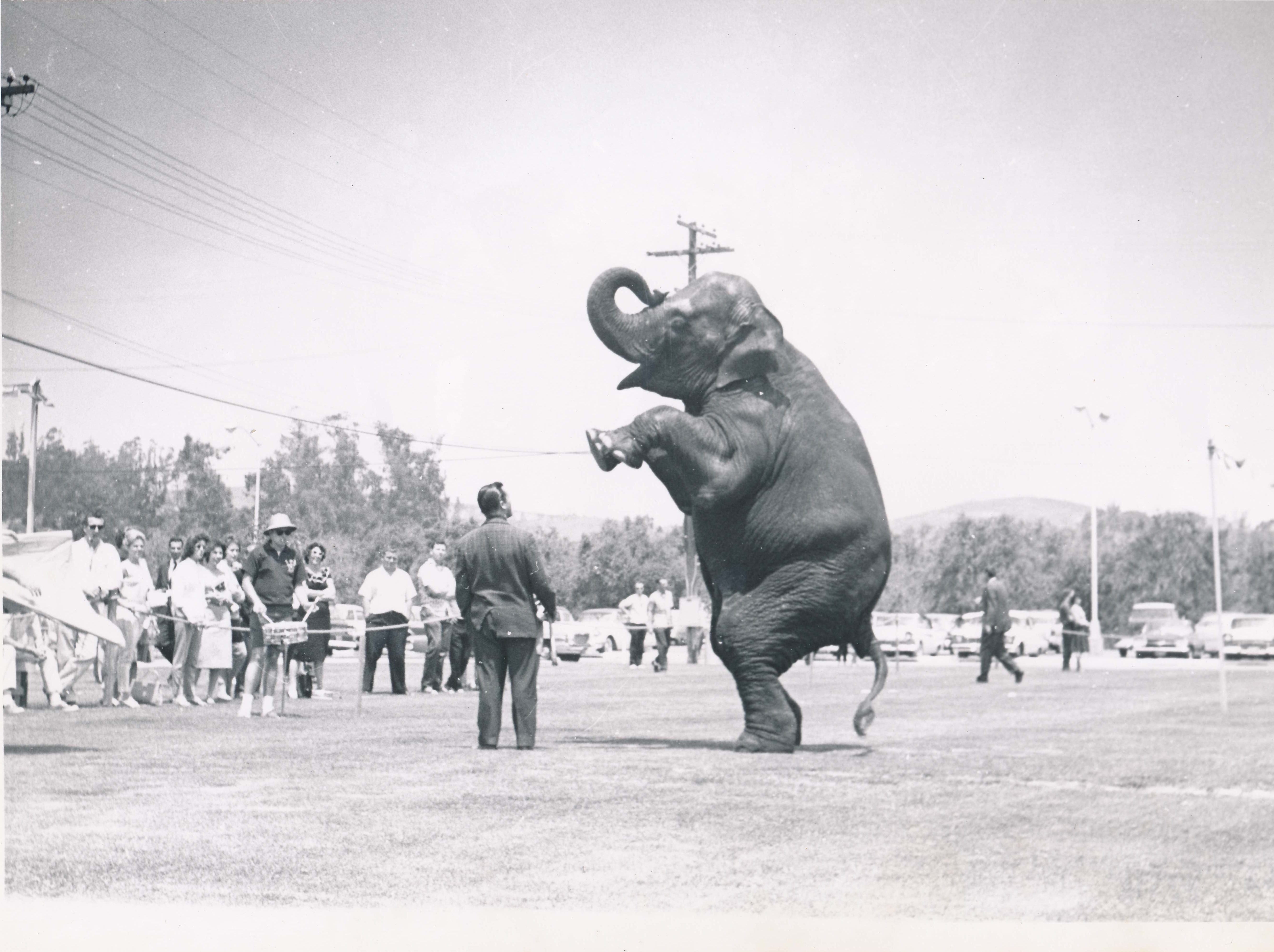 It was 1967. Women walked the campus in bobbed haircuts and slacks while men sported paisley shirts and shaggy hair. The Beach Boys, The Beatles, and Elvis Presley were among the many pop and rock artists whose music played on radios and record players. College students spent weekends at farmer’s markets, jammed to groovy music, and enjoyed the be the beautiful Southern California sunshine at nearby beaches.

Some students lived in the dorms on Nutwood Avenue, where Hope International University arrived in 1973. California State University Fullerton sociology alumna Jill Rodriguez, who attended CSUF in the late 60s, lived in the dorms. Four people belonged to one dorm room and a close-knit community formed in housing. Bonds were, and still are, strong.

“I still see several of the people from the dorms frequently,” said Rodriguez, now the administrative analyst for the College Health and Human Development. “We were a very small group of students and that is probably why we made lasting friendships.”

Student commuters came from near and far to attend classes. The 57 Freeway was constructed between 1967 and 1969 connecting Cal State Fullerton to LA and the Inland Empire.

There was one strong similarity between the 1960s Cal State Fullerton and today’s university: students had to fight for parking spots each day. While enrollment was much lower than it is now, there were no parking structures so finding a place to park could still be problematic. 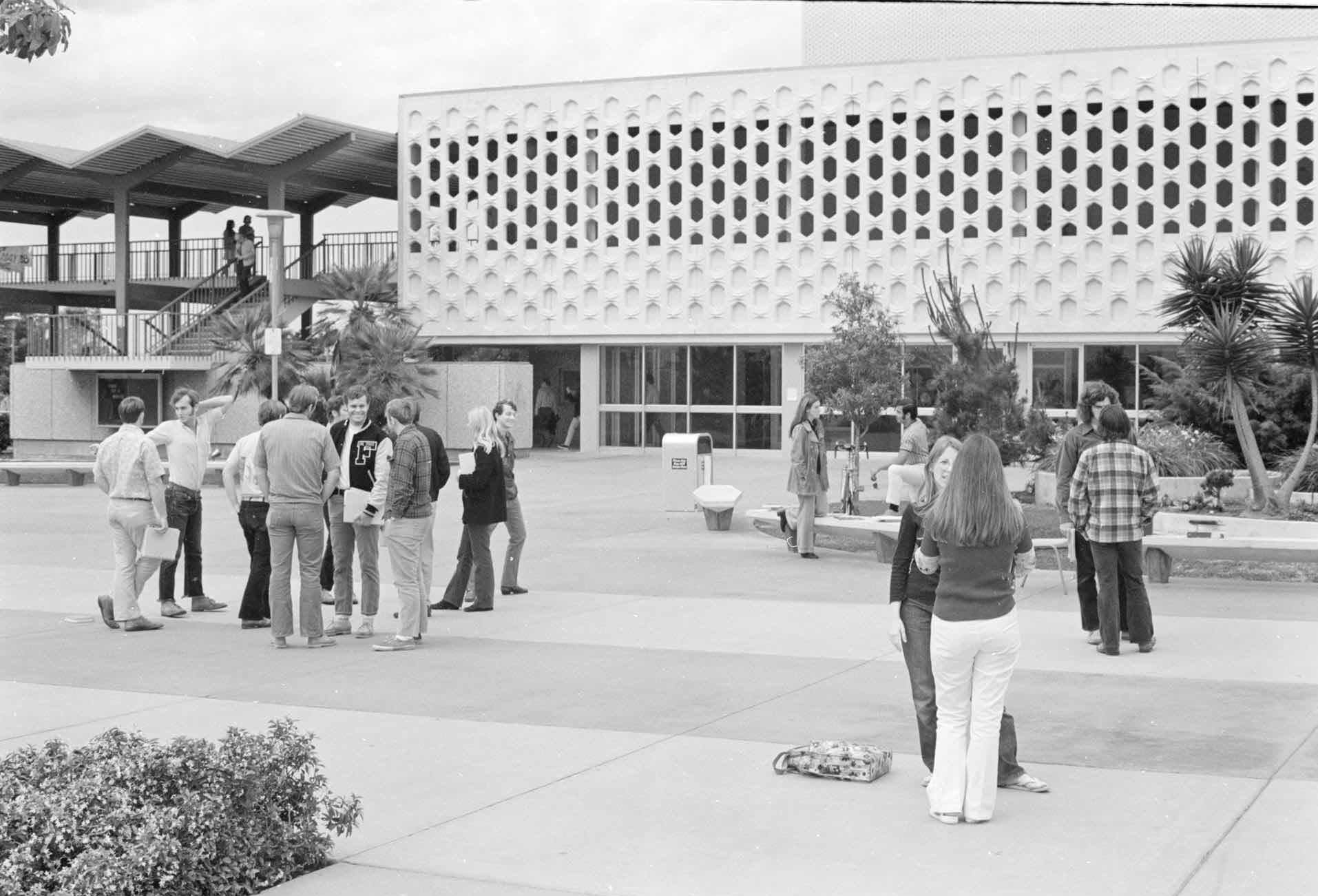 Mark Weyant: A Student and Active-Duty Service Member in the Late 1960s

Among those students with vibrant button-ups and long hair was Mark Weyant. After earning an associate’s degree from Riverside Community College, he transferred to Cal State Fullerton in 1969.

In the days before online class schedules, students like Weyant registered for classes by taking a card to the department offices and asking chairs to sign off for courses. On registration days assigned by grade level, students went to the performing arts building and presented the completed cards to the table appropriate for their major. Then, counselors punched the cards to show whether the classes were open or full.

While today’s students count the hours until their coveted registration appointment, their 1960s predecessors counted how many hours they waited in line to present their cards.

In 1969, Weyant’s education was interrupted when he was drafted into the military and spent two years serving in Vietnam.

If he were a student today, Weyant would receive priority registration because he served in the military. He would also have access to mentoring, scholarships, counseling and professional development through the university’s Veterans Resource Center, but the situation nearly 50 years ago was quite different.

“I received no priority registration or preferential treatment because of my military status,” Weyant said about his return, “I just re-joined the ranks of students.”

The only form of financial aid any veterans of the 1960s received was the GI Bill, known today as the Harry W. Colmery Veterans Educational Assistance Act or the “Forever GI Bill.” Provided by the U.S. Department of Veterans Affairs, the program was created in 1944 to support veterans who had served in World War II with financial compensation for tuition and housing.

When Weyant returned from the service in 1971, he was married and had a young child. While he was eligible for GI benefits, the computerization was less than sophisticated and Veterans Affairs lost his records.
“Being a full-time student would’ve drained my savings,” Weyant said. “I had to choose between being a student or finding a full-time job to support my family. Supporting my family was more prominent, which is why I never received my diploma.”

In the midst of the controversial Vietnam War, military service was a hot-button issue on campus.

University buildings were vandalized and crowded with butcher-paper posters reading “Make Peace, Not War.” Students and professors alike actively protested both in classrooms and on campus grounds. The Daily Titan reported the student’s wild reactions as “the largest scale demonstrations in Cal State Fullerton’s history.”

Because he was in the Army, Weyant found himself in opposition to many of his fellow classmates.

He remembered classes that “trashed” the war. English professors discussed prior European colonialism and compared it to current events. Not hesitating to make their liberal viewpoints known in class, professors encouraged students to take a stand.

“Students on strike and not attending class weren’t penalized, as they weren’t supposed to be,” Rodriguez said. “Instead, faculty offered alternative classes so relevant issues could be discussed and learning would continue.”

Rodriguez remembered on-campus buildings, such as the Little Theatre, being crowded for weeks with protesters who were living there 24/7.

In opposition to the war, movements such as flower power, which began in San Francisco in 1967, and free love were the rage on campus. To promote peace, students made flower crowns, dressed in floral clothing and exchanged flowers with each other. The implied opposition turned into a new “hippy” trend.

“Hippies were everywhere on campus and around the streets outside of campus,” Weyant remembered. “The Vietnam War was all over the news at the time so there were strong stances taken among the school.”

For Weyant, remaining a passive onlooker was not really an option.

“The Vietnam War era was decisive and polarizing, forcing a person to take a stand one way or the other,” Weyant said. “They were difficult times, but it built my character.”

Notable CSUF Alumni of the ’60s

Though Cal State Fullerton was only in its infancy in the 1960s, many alumni who would later make a major mark on the world graduated during this decade. Here are some of the 1960s Titans who have achieved Vision & Visionary status – the highest honor that can be bestowed on CSUF alumni.

Allan Comp ’65 (history) would go on to a career in historic and cultural preservation with the U.S. Department of the Interior.

Sue Ellen Cooper ’68 (English) would later found the Red Hat Society, which provides personal development and friendship opportunities to women in chapters around the world. Cooper’s daughter is a second-generation alumna of Cal State Fullerton.

Peggy Hammer ’66, ’70 (speech communication and M.S. in education-reading) pursued a 25-year career as an elementary school teacher in Placentia, during which time she organized the first Reading is Fundamental program in California, a leading voice for children’s literacy in the Golden State. Hammer passed away in 2016 at age 85.

Steven G. Mihaylo ’69 (business administration) would found Inter-Tel Inc., which became a major business phone and software provider for commercial customers worldwide. Today, he is the CEO of Crexendo Inc., which facilitates cloud communications for businesses. Mihaylo gave the largest donation in CSUF history to the university’s business college, which is today named in his honor.

James Woods ’67 (business administration) would become CEO of Baker Hughes Inc., one of the world’s largest oil field service companies. He and his wife Jeanette are major donors of Cal State Fullerton. The center responsible for the university’s annual economic forecasts is named in their honor.

Delbert Yocam ’66 (business administration) would go on to a major career in the tech industry, including serving as an executive for Apple Inc. in the 1980s, working directly under the company’s visionary founder Steve Jobs.

Plugged in: Titans and the rise of tech

While students today can send an email or a message to their professors through Titanium, earlier generations of students from the ’60s to the ’90s had to visit their professor’s office hours for any question, big or small.

In the 1980s bulky mainframe computers were the latest inventions. They were first used for coding practice, which biology professor Merri Lynn Casem remembered from one of her undergraduate classes, Computer Applications in Biology.

Before the online research database was launched, students crowded Pollak Library and dug through academic journals that best fit their theses.

Today students can request articles in the morning and receive them via email in a few hours, but in the 1960s it could take two weeks for delivery which left no room for procrastination.

“If you did procrastinate, you sunk,” Casem said.

The most useful classroom technology of the ’90s was the overhead projector. Professors stocked up on transparencies and wet-erase markers to project notes and demonstrations to students.

Mobile phones made their debut in the late 1970s, but ownership became popular in the early ’90s. This chunky device wasn’t a phone, camera, TV and boredom killer. You were the bee’s knees if you made a call using the one-button dial feature.